Cornelius (Neil) Baumann was born in Maspeth, Long Island and his wife Bertha in Brooklyn.   They met riding to work on the trolley car.

Neil’s ill health resulted in a move to the country for the clean air, as recommended by his doctor.  In 1913 the city boy, his wife, and two sons made the move to Greenville to a farm purchased by Neil’s father, Paul.  This first farm was across town from Brookside, and Neil struggled to learn farming to support his family.  He was a draftsman and a machinist by trade, educated at the Pratt Institute.  Country living was new to him.

Soon relatives began arriving.  They showed up in droves, eager to spend time away from the city at Neil and Bertha’s country farm.  The couple quietly shouldered the burden of feeding a never ending stream of family, until Neil’s brother Will suggested they started charging board.  And thus the family boarding business was born, originally at $7.00 a week!

In those days, guests had to entertain themselves.  They pitched hay, picked fruit and vegetables, went hunting for woodchucks and swam in the creek.  Two big treats were picking berries in Round Top and going for a picnic at the Ashokan Dam.

Bertha and Neil had a third son, Russell, in 1915.  Bertha built a successful boarding business over the next few years until 1919 when prohibition came, bringing with it family dysfunction.  Neil’s father Paul, who owned the farm, had been working in Mount Vernon at a country club.  When the club could no longer legally sell booze to it’s customers, Paul bought it all himself.  He hauled it to the family farm in Greenville, via train and wagon.  The temptation proved too great for Paul, and he lost himself into a life of alcoholism.  Neil fought with his father over his condition, and in an escalating argument, Paul banished the family from the farm.  Neil, his pregnant wife, and three sons were turned out in January of 1920.  Paul sold the farm, and their car immediately after.

It was a terrible time for the family.  They borrowed money from family to rent a small house near the current Brookside property.  Their fourth son, George, was born the following month.  Neighbors noticed that they had no wood pile and pitched in to help them make it through the winter.  George would later recount that his mother didn’t give him a bath until spring, for fear that he would catch his death from the cold house.

Bertha’s mother helped the couple to purchase a farm near their rental house following year, and in 1921 Baumann’s Brookside was born.  In the spring of 1922 the whole family pitched in to ready the place for summer guests.  There were no power lines yet to bring electricity.  Kerosene lamps, wood fires and hand pumped water were right in style, as were outhouses!

A year or so later Neil installed a 32 volt electric generator with batteries.  Looking back, the family would recall that this felt like a bigger improvement than television or jet planes!  Next came running water, electric lights and flush toilets.  Neil claimed to have the first flush toilet in West Greenville. Supposedly neighbors would form a line just to use it.

More buildings were added through the 30’s, and the pool was dug in 1939 using two horses and a scoop.  Neil and Bertha retired in 1945 and their third son, Russell took over.  In the 50’s more construction took place, the dining room and kitchen were enlarged and the rec hall was built.

In 1965, Russell’s only daughter Carol and her husband Richard, came into the business.  Richard had been a guest, and mused that he would one day marry the owner’s daughter and spend his summers by the pool.  That was short lived.  He later joked that the only time he got into the pool, was to paint it!  By 1970 rates were up to $90 per person per week, and included 3 meals daily and entertainment.

Business has continued, and improvements are always needed.  Time ticks on, and now the fifth generation of the family continues with the boarding business.  What started as a depression era solution to feeding too many visiting relatives, has evolved into a full service resort, with a staff of nearly 40.  We think Bertha and Neil would be quite proud. 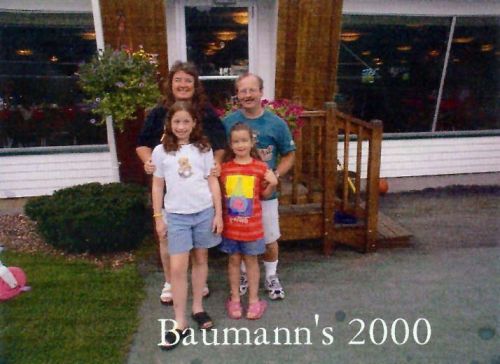 I used to roll my eyes when my father would say, “We’ve been coming to Baumann’s since 1949”. It sounded like he and his family came in the Dark Ages! My grandparents, Andrew and Catherine Hagan came to Baumann’s with their two children Audrey and my father Vinnie. Audrey married Ed and they came a few times, but it was my Dad who came more often. He would even come when he got a weekend off from the Army a few times! I have a photo somewhere of my Grandfather and Dad dressed as women for a contest Baumann’s held for their guests. What a sight! Eventually he married my mom Arlene and they had me (Coleen).

I can remember being of elementary school age, and riding all over Baumann’s property on a white golf cart with Russ Baumann (Carol’s Dad). I also remember the women wearing long dresses to the dances. I learned the Alley Cat at Baumann’s from Marge Smith and her friend Josie. I also loved hearing the song Florida coming from the jukebox in the “Casino” aka Rec. Hall very early in the mornings. I liked that song so much that I recorded it on a cassette and played it on the way to Baumann’s every year.

I eventually married Tom, and three weeks after we got married, we, along with my parents and their friends, drove to Baumann’s during Hurricane Gloria. Then we had kids (Cathleen and Kerry) and brought them to Baumann’s and they loved it! They even loved going to Baumann’s more than going to Disney! When they were younger, they would always race to the Dining Hall to be the first one in, just like I would do when I was their age.

That’s the great thing about Baumann’s; everything stays the same, which makes it feel like your home away from home. That’s one of the reasons people keep coming back; it’s clean, safe, relaxing, has good food and of course, great people. So this year my daughter will be bringing her son Matthew to Baumann’s making him the fifth generation from our family to vacation at Baumann’s. That just speaks for itself. Baumann’s holds a very special place in our family’s heart and in the hearts of many other families as well. We have had many friends and family join us over the years to see what a great place Baumann’s is and why our family has been going there for 65 years.

This is our story. To try to figure out when the Paulson Family members started coming to Baumann’s I had to begin at the beginning. If my Dad Charlie Paulson was alive today he would be up their in the late 90’s. His sister Mildred Beinert was very good friends with Mae & Dick Schreiber and they and all their friends would go to Baumann’s for weekend stays. They all came from Glendale, New York.

So what we did as young teenagers was to give our father Charlie a gift certificate for Father’s Day to spend a weekend up at Baumann’s with his good friend Beanie. And so they did and they would go to Saratoga and have a great time. Well we all decided that it was time for us to experience Baumann’s so we began to come up for a weekend each year the end of June as soon as school ended and for as long as I can remember since I was are 17yrs old and I am 62 now we have been going to Baumann’s every year since.

I am happy and proud to be one of the 15 Paulson Angels and every year as many as could make it went to Baumann’s every year. We switched from long weekends to a full week, when we kind of take over the place considering I was one of 15 children of Ann and Charles Paulson and I now have over 36 nieces and nephews and almost just as many great nieces and nephews. My three children all grew up going to Baumann’s as little babies graduating from the South Annex to the pool motel. There have been so many wonderful memories made here.

People come and go but the wonderful memories of growing up at Baumann’s is embedded in their hearts forever. My kids would rather go to Baumann’s every year then Disney World. It is were they transformed from infants to children to adults and most of them are parents themselves now bringing their children every year to recreate the memories of their childhood. In a world today where you need to keep a good eye on your children wherever you go, Baumann’s was a safe haven in the beautiful Catskills, were all were safe from the early morning hours to the wee hours of the night. I could go on and on but my Family Tree connection goes so deep with the Schreiber Family who have been wonderful friends over the years and you can not put a price on all the memories they have given my family over the years.

We will toast again this June those who have left us and all the great memories they have carved into this Family Tree of ours, never to be forgotten. Thank You Carol, Richie, Rosemary and Courtney for putting up with my crazy family, you had to put up with so much and you still kept inviting us back home again. Home that is what it is to the Paulson’s our summer home away from home. You are and always will be our extended beloved family.